About the Reef Coral Arks Project 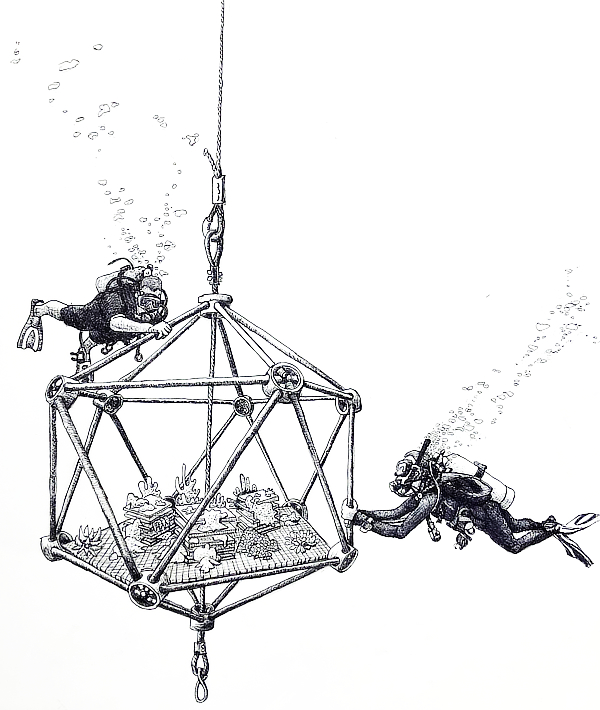 Coral Reef Arks were conceived to address a global need for new technologies that will help mitigate widespread coral reef degradation. Restoration efforts that target ecosystem-level processes, such as nutrient cycling, structural complexity and herbivory, are necessary to restore balance to these ecosystems and the services they provide. By moving corals up into the water column - distancing them from degraded substrates and providing improved access to light, flow, and nutrients - and by moving corals alongside the surrounding reef organisms that support coral health, Coral Reef Arks will create thriving "mini-reef" communities to support conservation and restoration goals.

The Coral Reef Arks system is composed of two components: the Coral Ark framework and Autonomous Reef Monitoring Structures, or ARMS. The Coral Ark framework provides the structure and habitat for the coral reef community, allowing it to be moved up into the water column. ARMS were originally developed through a collaboration between the NOAA, the Smithsonian Institution, and members of this project team to quantify biodiversity in marine habitats by serving as a settlement structure that passively aggregates cryptic marine species (Infinitediversity.org, oceanarms.org). As their collaboration to use ARMS to census biodiversity in the Indo-Pacific, Forest recognized that these standardized structures, which mimic the three-dimensional complexity of reef substrates, will be used to collect and move this biodiversity to Arks, where the cryptic organisms will carry out a variety of ecosystem services necessary to sustain healthy coral reefs.

Coral Reef Arks are designed with a specific application in mind. The shape, design, and materials used for Coral Reef Arks are project-specific and will be adapted to maximize success in different reef ecosystems. Most broadly, Arks will be suspended in the water column (Midwater Arks) or attached to the seafloor (Seafloor Arks). 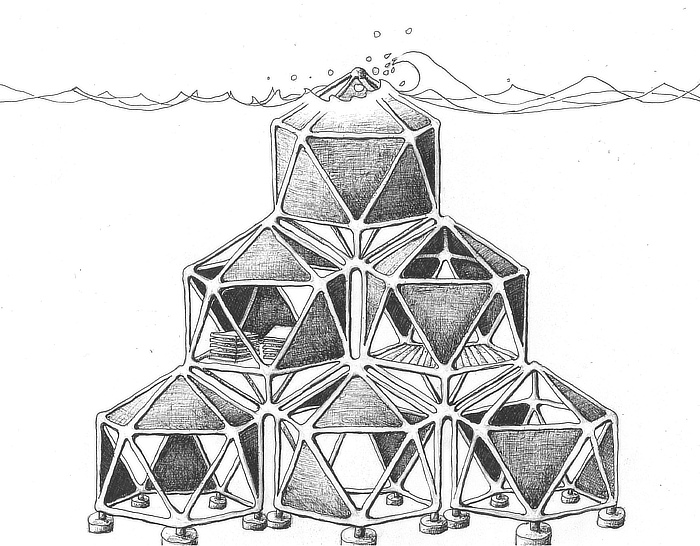 Midwater Arks will be used as coral nurseries, where adult corals are grown, fragmented, and reattached elsewhere. Larvae from broadcast-spawning organisms associated with Midwater Arks, such as corals and other invertebrates, will be carried down-current and could help repopulate degraded reef systems following storms or ship groundings. Midwater Arks will be designed with adaptive buoyancy systems that allow them to be moved deeper in the water column prior to hurricanes or warming events, or towards the surface to maximize light and flow (see Puerto Rico Arks project).

Arks will also be placed on the benthos, creating Seafloor Arks that serve as artificial reefs, dissipate wave energy, and protect coasts. These geometric structures will be easily stacked on top of each other to maximize wave energy dissipation, akin to a breakwater, replacing the structural complexity that is currently being lost as reefs collapse. The structural complexity inherent in both Midwater Arks and Seafloor Arks is expected to attract fish, boosting fisheries in areas that currently suffer from a lack of reef resources for nutrition (see Madagascar Arks project).

During the development phase, hydrodynamic models are developed to simulate the Arks in different flow environments, determine the maximum forces we expect the Arks to experience due to hurricanes, determine appropriate anchoring strategies for environments with different seafloor characteristics, and select optimal sites for long-term deployment.

After extensive testing, Coral Reef Arks are deployed on reefs and seeded with coral reef biodiversity. Ideally, ARMS units are deployed on the reef surrounding the Arks deployment site >1 year prior to the deployment of the Arks to allow them to collect the surrounding reef biodiversity. Seeded ARMS are then attached to Arks, along with corals, to create the robust "mini-reef" community.

Arks are monitored to assess the health and establishment of the Coral Reef Arks ecological community. Various metrics will be used, but some that we find particularly strong are:

These metrics will be compared against control sites on the reef to test our primary hypotheses across several reef environments.

Established Coral Arks will be used for a variety of purposes to conserve and restore reefs. They will be used as nurseries to grow corals and support local translocation efforts. Arks will be used to support fisheries, or as a refuge for damaged and fragmented corals following events such as hurricanes or ship groundings. Fully colonized Arks will act as sources of coral reef biodiversity that will be used to repopulate degraded reef systems. Stacks of Arks attached to the seafloor may be used to slow down wave energy to the shoreline, replacing the natural structural complexity lost due to reef flattening. Arks made from metal and electrified could be constructed to accrete over time into calcified structures that form a foundation on which new reef is built. Arks will be used as midwater laboratories, where new conservation technologies, such as materials to promote larval settlement or genetically engineered corals, will be tested away from the reef environment.

Coral Arks are intended as a tool that can be used in any environment to create a small, but comprehensive "piece" of the surrounding ecological community. On their own, they represent a fascinating means by which we can study the inner workings of a coral reef; en masse, they may represent a way to rebuild one.