Coral reef degradation is initiated by human activities, like overfishing and nutrient pollution, but is ultimately microbially-mediated: a process we call microbialization (Haas et al 2016). Removal of reef grazers and excess nutrient inputs cause the overgrowth of fleshy algae, which produce dissolved organic carbon (DOC) that fuels the growth of pathogenic and rapidly growing microbial communities and destabilizes viral communities (Haas et al 2011, Knowles et al 2016, Nelson et al 2013). These viruses and microbes cause coral death through disease and by drawing down oxygen levels in the water (Dinsdale et al 2008, Haas et al 2013, Silveira et al 2019), freeing up space for more algae and creating a positive feedback loop that shifts the ecosystem from coral-dominated to algal/microbe-dominated states. 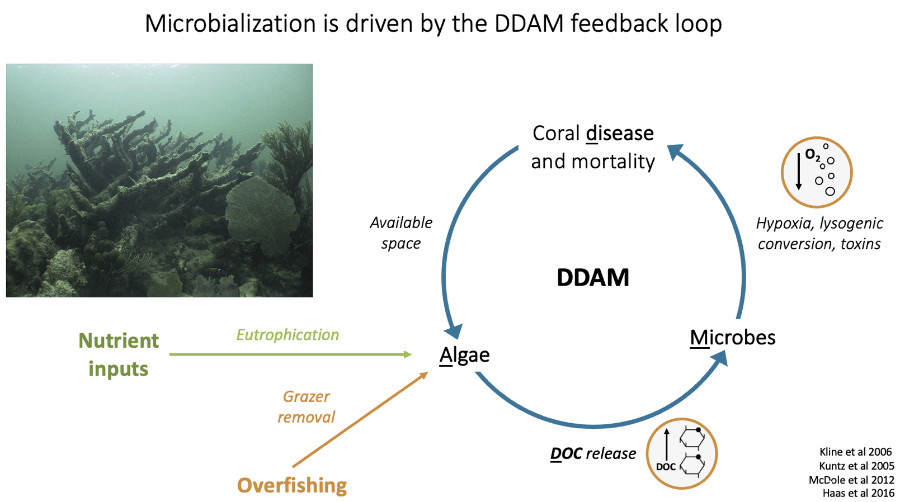 Arks are being used in the Caribbean and Madagascar to restore reef communities. Below, Ark design progression shows the change in Ark design (top panel, left to right) as different characteristics were incorporated. Eventually the geodesic design shown along the bottom was adopted.

Different structures of ARMS and Arks are being developed and tested

We are replicating the differences in coral geometries in a standardized way through the use of Limestone ARMS units with different internal complexities.

ARMS are used for coral transplantation, as we’ve done in Puerto Rico (figure below). ARMS chemistry or materials will be customized to recruit larvae of corals and other organisms that support them.

Similar to the ARMS, we are modifying the internal geometries of Arks to determine how these changes in three-dimensional space affect reef assemblies. In one of our Curacao Arks, San Diego artist Ben Darby created a midwater sculpture from real reef materials. He chose to model this Ark after the canonical bacteriophage (or "phage," meaning a virus that infects bacteria) capsid, lining the inside with a DNA double helix and surrounding it with supporting proteins, all made from limestone. 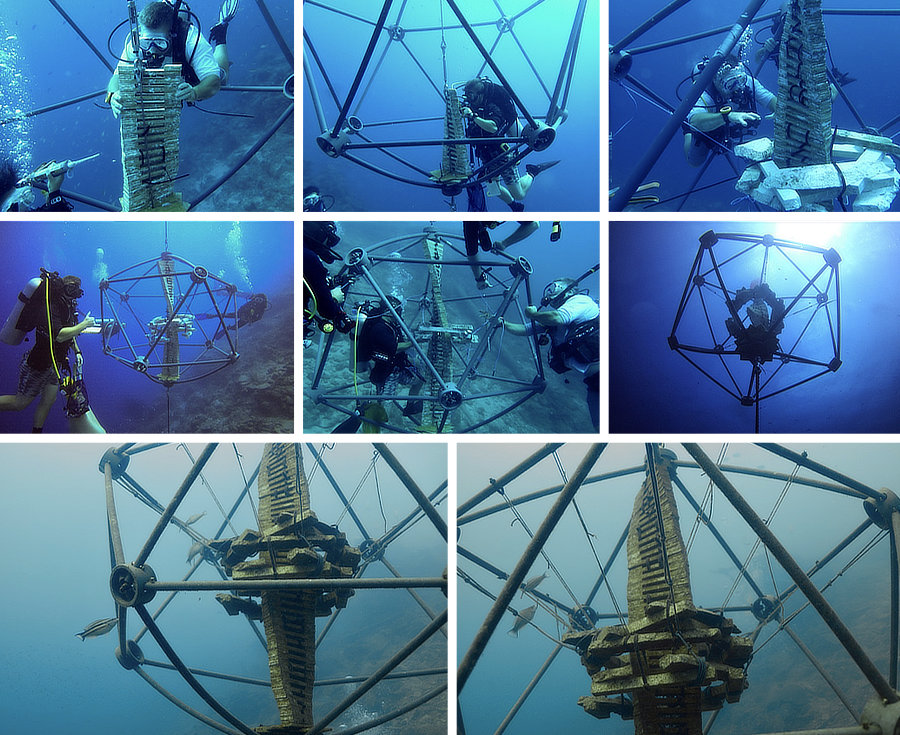 Our team has built Arks with several geometries, with the goal of understanding the role of three-dimensional structure in the formation of reef systems. In the diagram below, ‘V’ is the Sphere Frequency, or the number of subdivisions of each base triangle. Higher dome frequencies produce stronger, but more costly, Arks.

The Collapsing Ark, developed by SDSU Mechanical Engineering students Brandon Khamenian, Chad Zuanich, Nathan Hutchinson, and Gary Baldevarona, has an upright and a collapsed state. The Ark is upright and then collapses when ocean currents reach ~2 m/s. This Ark fits nicely into projects that seek to build self-sustaining reef ecosystems that replace ecosystem services like coastal protection and recovery from storm damage. 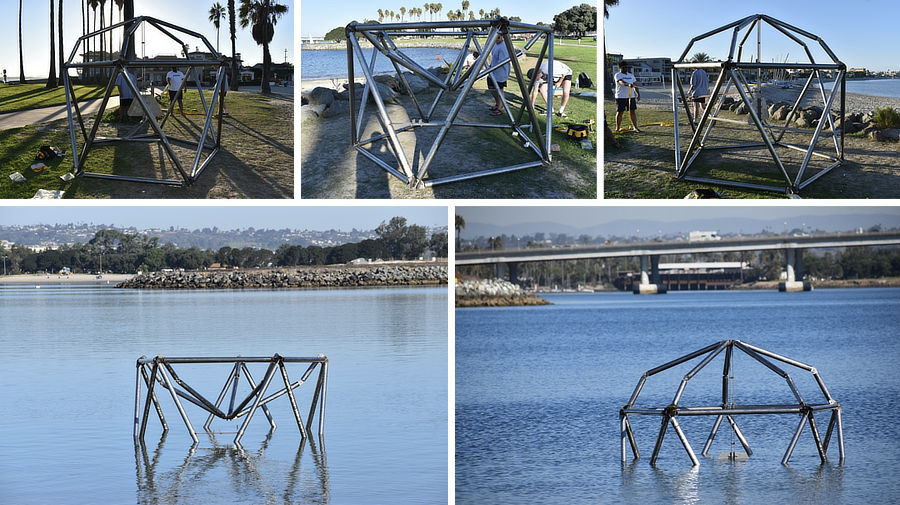 Photo credits: Jason Baer. The Collapsing Ark has an upright and a collapsed state, of which the latter has a higher likelihood of surviving storm events.

The Electrified Ark, designed by SDSU engineering students Courtney Brumm, David Trinh, Max Herrbach, and Gannon Gorman, uses active electrolysis to kickstart reef growth. Metal frames inside the Electrified Ark allow for active electrolysis to alter the local environment of these Arks in favor of calcifying organisms like corals, which is critical to scaling up coral conservation and restoration efforts worldwide. 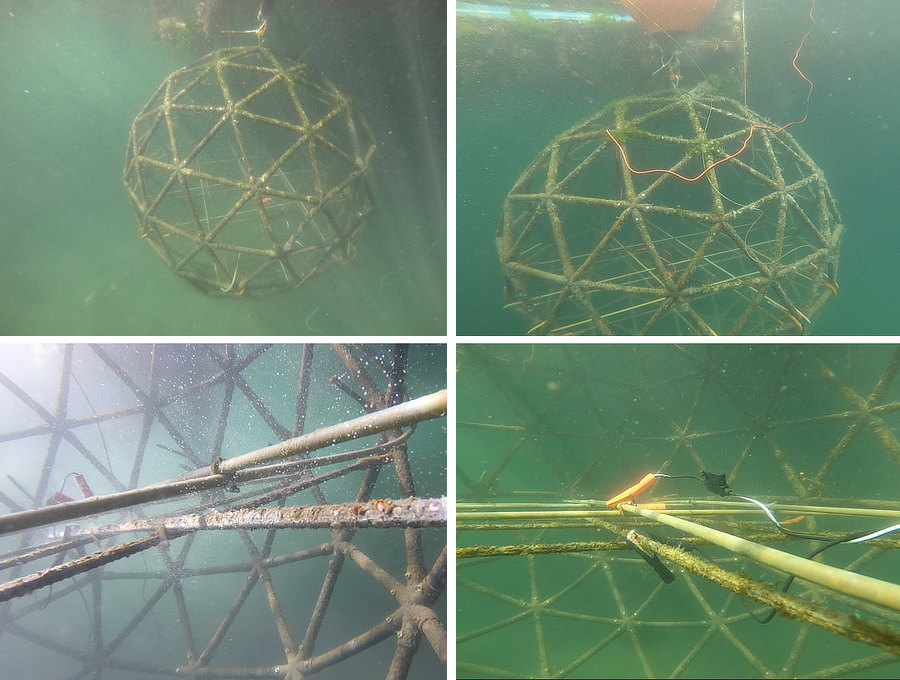